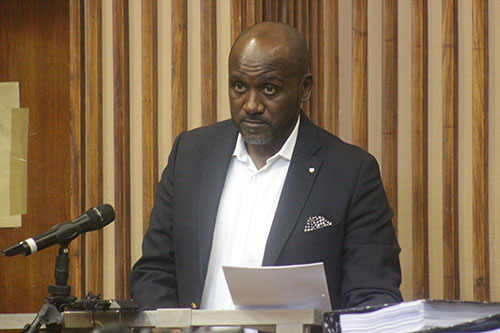 He was testifying in the bail application of Gustavo before Windhoek High Court Judge Herman Oosthuizen.

Gustavo has indicated to the court that he will be able to deposit N$250 000 as security for bail with the help of friends and family.

According to Kanyangela, there exists a real possibility that Gustavo will flee the country if granted bail as he has nothing to tie him to Namibia, no job and no assets and he has business connections in Angola. He further said it is nothing for Gustavo’s family to go visit him in Angola should he be released on bail and decides to flee to Angola.

“There is a real possibility that the applicant will be convicted and sentenced to a long prison term,” the officer told the court and continued that even with strict conditions attached, it will be easy for Gustavo to flee as Namibia and Angola’s border is porous and he can easily step through,” Kanyangela asserted.

He further said that Gustavo now knows the evidence the State has against him and the strength of the State’s case.

“The applicant is part of a syndicate that just came together with the sole purpose of forming a conspiracy to loot the marine resources of the country,” he stated. They showed utter disrespect for the laws of the country and changed laws to benefit themselves to the neglect of the Namibian population, he stated.

He further said that protests were held when the Fishrot accused first applied for bail, which shows the huge public interest in the case. There was anger from the public when the news first broke about the Fishrot scandal and the public will get the impression that “big fishes” are untouchable, he said.

With regards to interference with the investigation and witnesses, Kanyangela said that the witness list was made available to Gustavo and he knows who the witnesses are that will testify against him.

He also said that the amounts involved are huge, and the fraud was committed over a period of six years with the sole purpose to benefit the accused persons to the detriment of fellow Namibians. He said that the ACC first received reports in 2014 about fishing quotas taken from legal rights holders and “sold” to non-rights holders. That investigation, however, was misdirected until whistleblower Jóhannes Stefánsson came forward and steered it in the right direction.

He also told the court that there is no way that Gustavo and his co-accused James Hatuikulipi could have been part of a government negotiating team for the memorandum of understanding (MoU) between Namibia and Angola as they were not government employees. According to Kanyangela, the MoU was just a tool for the Fishrot accused to get their hands on the quota meant for needy Angolans. He said it was only useful to Gustavo and his co-accused. He further indicated that the process was initiated for the extradition of fugitive lawyer Marèn de Klerk and Icelandic nationals Ingvar Júlíusson, Egill Helgi Árnason and Aðalsteinn Helgason.

During cross-examination, Trevor Brockerhoff, on behalf of Gustavo, asked the investigator if he has any evidence that Gustavo ever tried to flee the country and tried to interfere with witnesses and the investigation.

“You have nothing to support your contention that the applicant will abscond or interfere with the ongoing investigation or witnesses,” he said, to which Kanyangela agreed. He further told Kanyangela that all of Gustavo’s financial and family ties are in Windhoek and he is fighting a restraint order against his assets through the office of the prosecutor general. That is enough reason for him not to leave the country, Brockerhoff stressed. Kanyangela answered that the restraint order which will possibly culminate into a forfeiture order means that Gustavo has no assets in Namibia which will make it easier for him to abscond. Brockerhoff further put it to the officer that he cannot dispute that Gustavo only became involved with Namgomar after the negotiations for the MoU were completed between two sovereign countries and as such, the MoU cannot be the brainchild of Gustavo. He further told the witness that he also cannot dispute that Gustavo merely acted on instructions from Jaõa de Barros when he transferred money from the Namgomar account to entities belonging to James and Tamson Hatuikulipi.

Gustavo is facing two counts of racketeering, two counts of money laundering, four counts of contravening the Anti-Corruption Act, three counts of fraud and conspiracy to commit fraud alternatively theft, and one main count of theft.

It is alleged by the State that Gustavo benefitted with at least N$22.4 million from the Fishrot scandal.

Also on the list of people added to the charges is lawyer Marèn de Klerk.

The State is yet to extradite De Klerk from South Africa and Icelandic nationals.

The State alleges all the accused acted in common purpose.

The matter will continue on Wednesday at 09h30 for submissions on the ruling. -rrouth@nepc.com.na