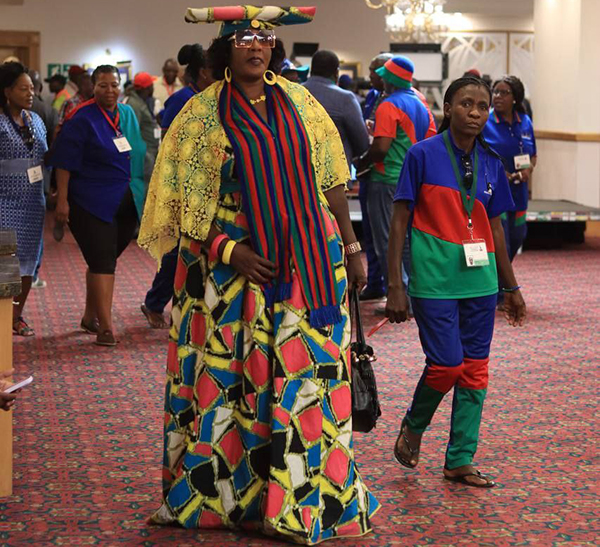 Swapo this morning ushered in a new leadership with President Hage Geingob at its helm and a new central committee as the ruling party attempts to assert being a force to be reckoned with in the local political theatre.

At exactly 18h45 yesterday, Geingob cast his vote to set the election in motion as Swapo members and sympathisers waited with bated breaths, their eyes fixed on the coveted vice presidency (VP) post.

Asked how voting felt shortly after casting his ballot, Geingob lightly replied: “I have been voting before you were born… asking me ‘how does it feel’. You’re a newcomer (sic).”

On face value, there was no outright favourite, with each of the three camps claiming to have the majority of delegates on their side.

There was, however, a short delay in the voting process as ballot papers had to be reprinted as the initial ones had no serial numbers, amongst other anomalies.

Different camps attributed the shortcomings to Swapo’s election head Joshua Kaumbi and his new team’s lack of experience, or a deliberate attempt to sway votes in a certain direction.

“I know Kaumbi is an upright comrade. If there are any issues with the process, it will be human error. I don’t see him as someone who will deliberately compromise the process,” said one of the candidates, who is aligned to Nandi-Ndaitwah’s camp.

“There is no way that people can forget to print ballot papers with serial numbers, even if he or she is new. The blueprint is already in place.  The good thing is we made sure we really have competent observers who can easily pick up these sorts of thing,” said a member of the Kuugongelwa-Amadhila group.

Setting the tone for the Swapo mega event on Friday, Geingob quashed political analysts, the media and adversaries for driving a wedge between the ruling party and Namibians. “Don’t deny the truth,” Geingob told naysayers and “prophets of doom”. Geingob went on to say Namibia, under Swapo’s rule, is marching towards total economic emancipation for all Namibians, adding that only a mature political formation can take Namibia to the biblical ‘Promised Land’.

“Only Swapo can lead this country,” he stated. While acknowledging that the country is confronted by a myriad of challenges, he said the Namibia Swapo leads today is miles apart from what was inherited at independence.

The head of state also hailed the Swapo-led government’s anti-corruption stance. This, he said, is evidenced by the fact that two former Cabinet ministers, Sacky Shanghala and Bernhard Esau, were arrested in the sprawling Fishrot corruption scandal.

Geingob said it pains him that his two comrades are behind bars, but due processes must take their course. What was new, however, was the absence of two former Swapo leaders, Founding President Sam Nujoma and President Hifikepunye Pohamba, at congress.

This was their first no-show since independence. According to the program, the two were supposed to deliver speeches, which normally sets the tone and direction of the congress. This was not to be, as even their speeches were not read on their behalf. It remains a mystery why the two Swapo heavyweights did not show up.

On her part, Swapo secretary general [until Sunday afternoon] Sophia Shaningwa dismissed claims that the party was falling apart under her watch. The contrary, she said, is true as she has kept the Swapo ship above stormy waters.

At the time of going to print yesterday, there were no clear front-runners in the contest, although the mood on the ground suggested that the real competition was between Nandi-Ndaitwah and Kuugongelwa-Amadhila, while the ever-composed Shifeta lurked behind as a dark horse.

About 800 delegates elected their VP in a vote widely seen as a decisive moment for Swapo’s survival. The secretary general’s position was also tightly contested when Shaningwa faced the ambitious Oshikoto coordinator, Armas Amukwiyu.