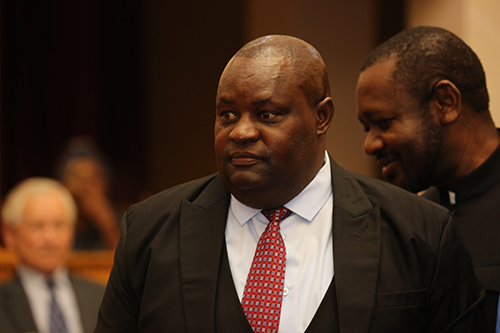 Popular Democratic Movement parliamentarian Kazeongere Tjeundo has called upon those supporting the N$18 billion genocide agreement to convince parliament as to why they think the deal is justifiable.

Tjeundo made this call in parliament on Wednesday whilst contributing to the genocide motion tabled by defence minister Frans Kapofi. An agreement was reached earlier this year between the Namibian and German governments, which saw Germany committing N$18 billion to aid local projects over 30 years.

“The extermination order directed towards the Ovaherero and Nama people saw them losing their human dignity, including certain elements of their language, culture and identity”.

“Today, the descendants of these two tribes are found scattered in the diaspora, not able to speak their mother tongue and having lost the very essence of their identity and culture,” said the official opposition MP.

He said the agreement does not appease the Ovaherero and Nama people in terms of the provisions under international law, and it fails to meet the basic requirements of what would constitute genuineness when one considers the context surrounding the genocide of 1904 to 1908.

According to him, the agreement also falls short of what was envisaged in the motion by the late Paramount Chief of the Ovaherero people, Kuaima Riruako.

“In that motion, the terms of reference of what we sought to achieve when we embarked on this journey almost 15 years ago were very clear.

He said Germany as a principled democratic nation must rise and face its “cruel, barbaric, historical acts”, and show remorse for the genocide they committed against the Ovaherero and Nama people.

“The two parties must go back to the negotiating table, this time with the representation of parliament and the affected communities, both in Namibia and the diaspora,” he proposed.

“It cannot be about us without us. This is the only manner in which we can birth a better deal, one which speaks to proper atonement through reparations,” he added.