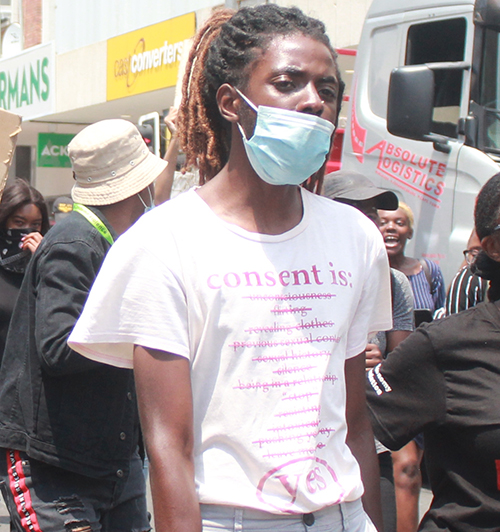 Lebbeus Hashikutuva was interviewed by the City Police yesterday after the alleged theft of an undisclosed amount, estimated to be more than N$30 000, stemming from a case opened against him last month.

This was confirmed to New Era by Superintendent Cillie Kapolo from the City Police’s public relations division. “What I can confirm is that we picked him up for questioning relating to a theft case, which was opened last month at a Windhoek police station. Yes, the police have been looking for him and finally got hold of him this morning,” said Kapolo, who couldn’t go into detail as the case is still under investigation.

She added that no reports have been submitted on whether he will be arrested as the case is in its infant stages. But the available information is that he was still being held for questioning at the time of going to print due to a case of theft involving an unspecified amount of money.

A source close to the saga late yesterday said Hashikutuva’s family paid N$35 000 so that the aggrieved party can withdraw the case as they don’t want their son to have a criminal record. The case has been linked to the partnership between Hashikutuva and the AfterBreak

Magazine, where they sought his expertise and knowledge about the media industry. The AfterBreak Magazine, owned by Rejoice Amutenya and Mehafo Amunyela, is a digital magazine aimed at empowering and entertaining young Namibians.

According to a statement issued by the magazine, the payment for work done was only accessible to Hashikutuva as the funds were transferred into his account. “Rejoice Amutenya, as the co-owner of AfterBreak Magazine, gave Lebbeus Nghindimondjila Hashikutuva the right to enter into three contractual agreements on behalf of AfterBreak. This was due to last-minute changes and new information, which meant that we needed to re-sign the contract as well as provide a bank confirmation letter, which had not been previously requested. We asked that Lebbeus sign the contract and provide a bank confirmation letter, which he already had,” outlined the statement.

The work rendered by the magazine raked in N$40 000, which only Hashikutuva allegedly had access to. But when contacted by the partners, he had excuses, which included him having lost his phone which had his bank card and ID, and other reasons such as having contracted Covid-19. Hashikutuva has been trending all week after allegations emerged that he embezzled funds when he couldn’t account for US$5 000 awarded to the #ShutItAllDown movement by the Office of the African Union Youth Envoy.

The organisation awarded the movement with the Silencing Gender-Based Violence Award based on them demanding robust and substantive action in curbing the prevalent occurrence of sexual and gender-based violence (SGBV) in the country.

The organisation helped the movement to amplify its cause through various demonstrations against SGBV nationwide, which caught the attention of top decision-makers, including President Hage Geingob, the justice ministry and others. President Geingob had a brief meeting with the group after their demonstrations attracted headlines locally and internationally. After public outrage and frustration, Hashikutuva attached proof of payment detailing the transfer of US$5 000 to the #ShutItAllDown movement.

“His behaviour and blatant bending of the truth in the last few months has led us to have minimal trust in him, and once we can be sure that the money we have received is legitimate, we will gladly proceed with our programming,” read a statement from the movement, which added that they are eager to put all this behind them and continue with their agenda.

They are optimistic in continuing to uphold proactive dynamism, and to ensure that regrettable development does not contaminate the morale of youth activism.

Earlier this week, the advisor on youth matters in the presidency Daisry Mathias tweeted in reaction to the scandal that it’s “a blight to the movement.. and a stain, not only on the culprit, but on young capacity in general. Integrity and accountability are expected at all levels of leadership and society. If reports are true, I call on @nghidimondjila_ to pay back the embezzled monies.